H Street in Washington, D.C., in the area where reporter Susan Armitage was attacked.
Photo by Kara Khan

I knew I didn’t look good, but after a day of ice packs and Netflix, I was getting used to it. The curve of skin where my nose met my face had been cracked open. A bright purple crescent bloomed across my puffy cheek, swooping out from the inner corner of my right eye. 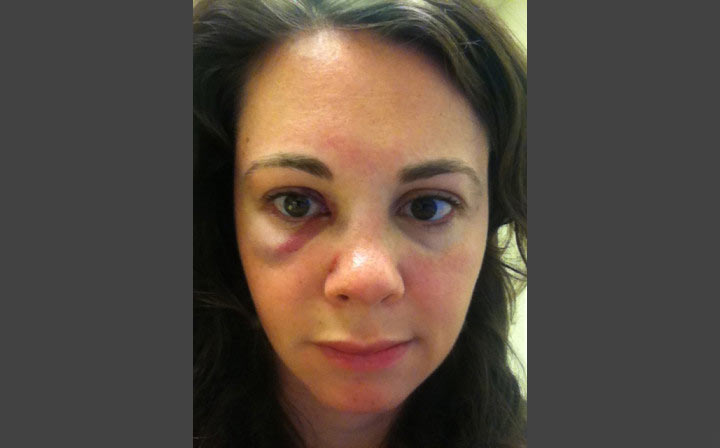 The author as she appeared the day after the incident.
Photo by Susan Armitage.

“A girl did that to you?” my coworkers asked when I came back to the office, wincing at the sight. “Why?”

I was headed home on a warm night in Washington, D.C., in May 2012 when I saw the girl. As we parted ways, the friend I’d met for dinner asked if I’d be OK getting back from the metro station. It was a 20-minute walk to the basement apartment I rented a few blocks off H Street Northeast. After decades in decline, the strip was changing fast, with quirky bars that served craft beer popping up near closed storefronts and inexpensive nail salons.

I’d lived in the area for more than a year, so, I knew which blocks to avoid. And although at first I’d felt self-conscious as a white person living in a mostly black community, I’d quickly realized I was pretty much invisible to the teenagers who hung out in the neighborhood.

So when I noticed a group of young people in front of a row house across the street as I walked home, I didn’t think much of it — until the girl started to drift towards me on a diagonal path. She seemed drunk or high, maybe. I thought she might want money. I’d recently heard a woman asking for $8 so she could feed her daughter; I figured it was the cost of a hit of something.

I quickened my pace and pointed my city stare straight ahead as if I didn’t see the girl. But my body tightened as I felt her loop behind me. Still, it seemed alarmist to run or scream. I half-expected her to shout “Boo!” and break into peals of laughter, glad to have made me sweat. This was a joke, I decided, and on a dark street with no one else around, I wasn’t going to jeopardize it by doing something off script.

A few seconds later, I realized the two guys with her had cut into the middle of the street and were walking parallel to us, blocking me from crossing to the other side. It was not a joke. I could feel the girl close behind me — too close. My knees strained with each step against the pencil skirt I’d worn to work that day. My heels clicked against the pavement like a metronome, the sound suddenly louder than anything else.

“I have a headache,” she said, the only thing I remember hearing her say.

I clenched the long strap of my purse against my hip and wished I had written down my credit card numbers and put the passcode back on my iPhone. I was at once terrified and strangely calm. After five years of living in the district, I reasoned, it was finally my turn to get mugged.

What happened next took me totally by surprise. As I braced for her to rip my bag away, the girl hooked a punch around my right ear. I touched the blood gushing from my nose and remembered that a teenager had once randomly clocked my friend Tim on the Philadelphia subway.

I realized in disbelief that my bag was still on my shoulder. I looked inside to find my phone and wallet still there. By the time my legs realized it was time to run, my assailants were gone. I ran anyway, hiking my skirt up over my knees, looking over my shoulder, dashing into someone’s yard and listening for footsteps before I decided it was safe to keep going. Before long I ran into a man who walked me across the street to a 7-Eleven where several police cars were parked.

The officer who took my report told me it sounded like a textbook gang initiation. Hitting me was something the girl had to do to be accepted, to prove she was tough. I couldn’t fault her choice of victim — at five foot five and 125 pounds, I don’t exactly look like the kind of person who will hit back, especially in a peach-colored dress shirt. But as I lay on a gurney in the ER, waiting for a CT scan, I knew I was lucky. It could have been much worse. And for that girl, I knew it was.

I wondered what went through her mind before she put her fist in my face. She seemed numb but also hesitant, scared. Why was she there that night? What had gone so wrong for her to make this choice? Did she feel bad for hurting me? Did she laugh about it?
Would she do it again?

Next time, would it be easier?

I never got to ask her those questions, but I still wanted to know the answers. Reporting for JJIE, I talked to researchers who study female gang members, practitioners who work with female juvenile offenders and girls who’ve been through the court system. They confirmed that while what happened to me was random, the circumstances that drive girls to commit violence aren’t. Dysfunctional homes and neighborhoods, tumultuous relationships, physical and sexual abuse, mental illness and a lack of adult support all play a part.

Buddy Howell, a researcher at the National Gang Center, told me girls who get involved with gangs take on even greater risks.

“The major reason they give for joining the gang is protection, but the irony is that they’re more likely to be victimized if they join a gang.”

I did find one bright spot in my conversations with researchers. Dana Peterson, a professor at the University at Albany School of Criminal Justice, told me studies contradict the popular lore that once someone enters a gang, it’s for life. Many young people who join do move on, she said.

“It doesn’t mean that they don’t have some kind of serious experiences or cons from even a short-term gang involvement,” she added.

My nose healed and my black eye faded a few weeks after the assault. The small patch of dried blood on my shirt came out in the wash. I’m more careful of where I walk at night and I look over my shoulder a lot, but I can still do the things I want to do. Not long after I was attacked, I watched friends get married in New Orleans, traveled to Romania for work and then moved to New York to start grad school.

I don’t know what happened to the girl who hit me. I doubt I’d even recognize her if I saw her on the street today. In my memories of that humid night, she’s a faceless person with a short haircut, a blue t-shirt and a headache.

I do know she needs help. If she hit me because a couple of guys wanted her to, I worry about what else they can get her to do. If she grew up surrounded by violence, like some of the girls I interviewed, she needs to find other tools to resolve conflict.

I’m not sure she will get the support she needs behind bars, if that’s where she is now.

She may be worrying about her own safety. Or she might feel that the system has given up on her and her fate is to grow into the role of an adult criminal.

A few months ago I spoke with a young woman just before her release from a juvenile facility. I asked her what about leaving she was looking forward to.

“I want to go back to a real school,” she said. She told me that in the classes she attended while in custody, the teachers didn’t care when kids put their heads down on their desks. Fights broke out frequently, and the other girls always had a point to prove.

“I’m too different for this,” she told me. “I got in trouble, but this is not who I was supposed to be.”

I hope the girl who hit me feels the same way.