Story and photos by
Susan Du

HARRISBURG, Ill. – Jaime was jumped by seven boys the very day he set foot in Illinois Youth Center – Kewanee one year ago. He was later raped in the shower, and is hounded daily by guards who call him a “punk-ass nigger bitch,” according to his mother, Celia.

Jaime (his name has been changed for this article) wants to call his mother more than once a month for five minutes, and he wants to go home to see his grandmother before she dies, Celia says.

But both requests have been denied, she says, and he recently resorted to breaking a window and eating glass in order to kill himself.

At 14, Jaime is the youngest inmate at Kewanee.

A two-hour drive from Chicago, the facility has historically housed juveniles needing mental health treatment. The facility is, however, undergoing a change in mission. State officials deny these had anything to do with legal pressure, but the changes have been implemented since a lawsuit filed by the American Civil Liberties Union against the Illinois Department of Juvenile Justice that resulted in a binding consent decree.

Read more about the lawsuit and Kewanee’s troubles HERE

Jaime’s mother says he is serving an indefinite amount of time for punching a boy in the nose. By “indefinite,” the judge on his case meant that release is contingent upon how soon he can learn to suppress his anger management issues and behave.

But due to his mental health issues, Celia says, Jaime lacks the self-control to hold back when he feels threatened either by other inmates or prison staff. When someone picks a fight with him, he blacks out and reacts like a “cornered dog,” racking up fresh battery charges with every incident that prevent his release.

Jaime has spent a year locked up at Kewanee, and although he was originally sent 300 miles away from his home here to receive treatment for his bipolar disease, oppositional defiant disorder, attention deficit disorder, post traumatic stress disorder and obsessive compulsive disorder, he has yet to be assessed by the prison, his mother says.

Illinois Department of Juvenile Justice representatives, however, say all inmates receive psychological screening on the day of their arrival, before they’re assigned to their rooms. Over the following two weeks, youth are diagnosed for any mental health conditions and assessed for self-injurious behavior.

Back home in Harrisburg, not far from the Kentucky border, Celia and her mother, Kathy, live in a one-bedroom apartment infested with cockroaches and worms, where mice scratch nightly from inside the walls. Photos of Jaime are tacked up all around the den next to the sofa where Celia sat pouring over a file bursting with her son’s court documents and mental health evaluations, wondering if she had missed something that could bring him home.

Among the documents is a social investigation report filed by the Saline County Circuit Court in August 2012. Physically, it was noted that Jaime had required stitches to his head three times as the result of accidents that occurred while he was in his father’s care, and although he had contracted lead poisoning during the same time, he never received treatment. A mental health summary included in the package details Jaime’s treatment at the Egyptian Health Department in Eldorado, Ill., prior to his incarceration. EHD reported that he had been psychiatrically hospitalized on three occasions and recommended individual and family therapy. He was prescribed Depakote, Prozac, Rispirdol, Seroquel and Adderall.

“He’s gonna kill himself, or I’m gonna kill myself. He’s there, and I’m not doing nothing for him,” Celia said. “It is a known medical fact, the number one building block to a child’s mind is, what? His own community and his own family. Why the hell is he so far away?”

Celia, who says she discovered her son’s various attempts to hang, beat and cut himself only when she called Kewanee to check up on him, wants the Department of Juvenile Justice to recognize the impact of adverse early childhood experiences on Jaime. 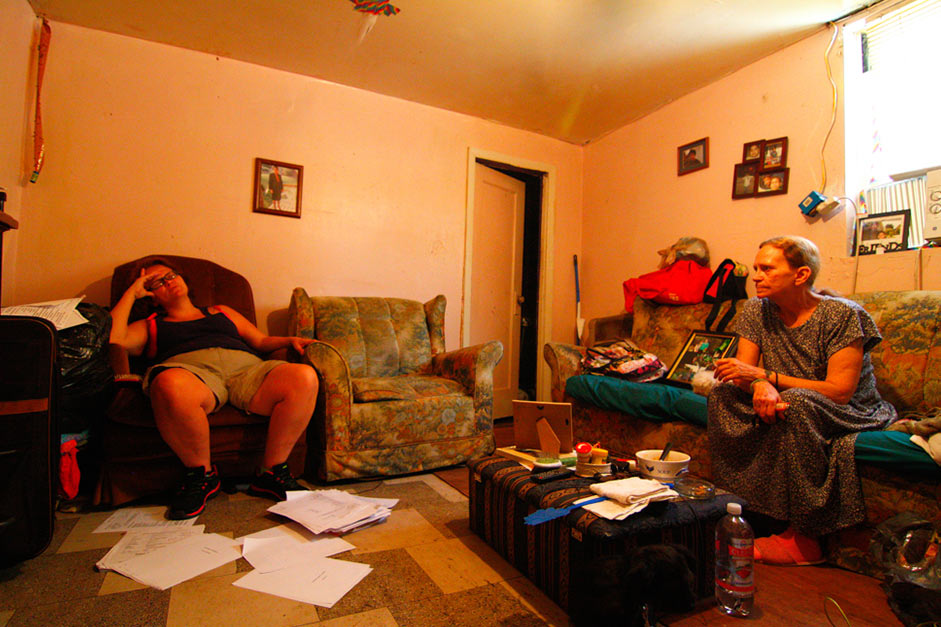 Celia and her mother, Kathy, sit in Kathy’s home with pictures of Jaime tacked on the wall.

DJJ representatives declined to comment on individual cases, but maintained that officials are making proactive efforts to bring families into the decision-making process regarding inmates’ mental health treatment.

Director Arthur Bishop says the department “can’t prevent [suicide] attempts, but the successfulness of these attempts,” which includes eliminating risk objects in cells and gathering relevant information from parents about their child’s mental welfare.
“[We] hope to give the caregivers or the parents a comfort level where they can share that, have some dialogue as to whether [suicide attempts] are legitimate,” he says. “Any time you have congregant care, … youth attempt these things, whether it’s acting out or whether it’s to garner attention.”

Jennifer Jaworski, chief of mental health services, added that if Jaime is telling his mother that he is uncomfortable or shy in group therapy, he can instead request to see an individual therapist at any time. “I know our staff try to accommodate them,” she says.

According to Celia, Jaime, at 8 years old, watched as a group of masked gunmen entered the room where he lay on the couch with his head in his uncle’s lap. The men pumped 17 rounds into the uncle, Celia says, and they would have killed Jaime too if he had seen their faces, emergency responders said at the time. Jaime was rushed to the hospital that night drenched in blood.

After Celia fought for and won full custody of her son, she immediately enrolled him in a behavioral school in nearby Eldorado, but in certain ways the damage seemed permanent. Jaime exhibited a deep distrust of strangers and bristled with defensive rage whenever he felt threatened. He played only with small children and seemed stuck with the mindset of an 8-year-old despite having already crowned six feet in height by age 14, she says.

He was one of few black children in Eldorado, and his minority status as well as his mental illnesses occasionally marked him as a target for harassment. But he was big, and potentially dangerous when he inevitably chose to retaliate rather than take a beating.
Celia is convinced that because she’s his mother, she knows what Jaime needs. A call to her a week. A visit from someone who cares. Guards who will protect him when he gets jumped and do something about it when he gets raped. More one-on-one counseling appointments because she knows he won’t speak up in group sessions.

But without a car of her own, Celia needs to spend $500 per trip to Kewanee on gas, a driver, lodging and snacks for Jaime. It’s more than she has left after she pays $400 out of Hammons’ monthly $700 Social Security check for rent on the apartment, and it’s never certain if Jaime will be eligible for a visit or if he will be locked up in solitary confinement when she arrives. 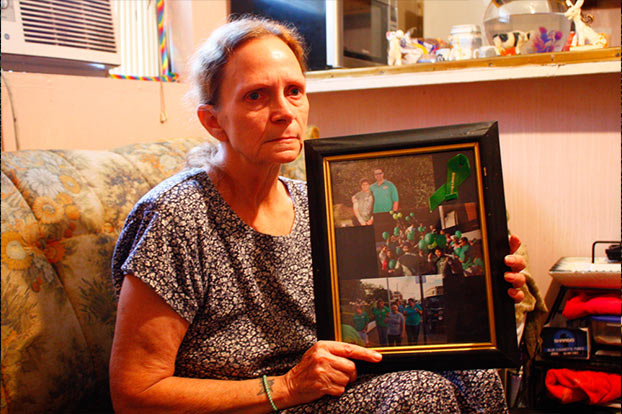 Kathy Hammons, Jaime’s grandmother, displays a photo collage of Jaime taking part in an Egyptian Health Center event in which he testified to counselors’ ability to help him manage his anger.

In a plea for funds to visit her son, Celia reached out to the  John Howard Association, This prison watchdog group helped bring Jaime’s situation to the attention of facility administrators and state authorities. It also put Celia in contact with juvenile justice advocates and attorneys, as well as with Chicago anti-rape activist Mariame Kaba of Project NIA, which helps transport families with incarcerated daughters to IYC-Warrenville. Kaba promoted Celia’s story to online supporters who made donations in excess of $400.

Kaba says after she started partnering with Warrenville to foster connections between inmates and families after she called several facilities to ask how often kids received visits and discovered the answer was often “never.”

“The system should do whatever they possibly can to keep kids closer to home. They have to figure out a way to build partnerships in communities. I don’t see why they can’t rely on various church groups, families all over the state,” she says. “DJJ says they’re doing a proactive job, when they all say, when you ask them, that kids hardly ever get visits. Why aren’t they asking why? They can do better. They should do better on behalf of those kids.”

As for Celia’s complaints about the quality of her son’s mental health treatment, she says officials at Kewanee reminded her that she is a mother, not a doctor, and she says they have told her that Jaime is currently receiving the best medical attention possible at IYC – Kewanee.

“They don’t see the same patterns as I do. I go to sleep, and I can picture him curled up in a ball crying for me. And this is the worst feeling a parent could ever feel,” Jaime’s mother said.

She can rattle off the names of reoffending wife-beaters, meth cooks and drunk drivers in Harrisburg who she says have been in and out of jail faster than her son. Celia knows Jaime doesn’t understand when he sees kids incarcerated for more serious crimes than his walk out of prison when he has to stay.

“I think the justice system is so backwards sometimes,” she said. “You’re freeing the man who’s making the kids the way they are. My baby did something as a juvenile, he can’t get a second chance.” 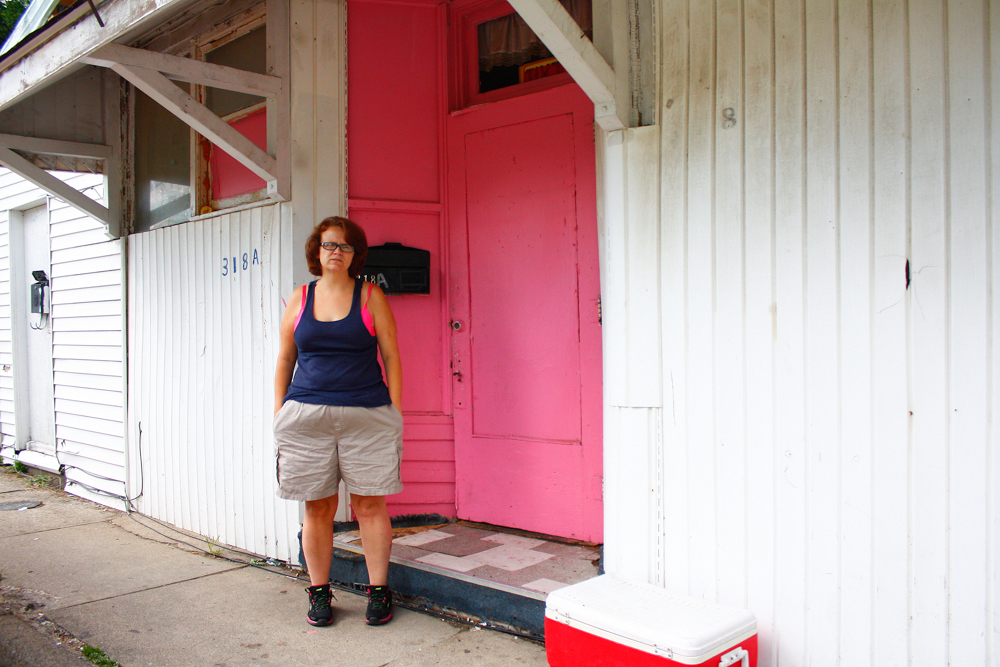 Celia stands outside her home in Harrisburg, where she lives with her mother. Money is so tight she does not have enough to travel to see her son.